Home » Blog » What to look for when buying a new car 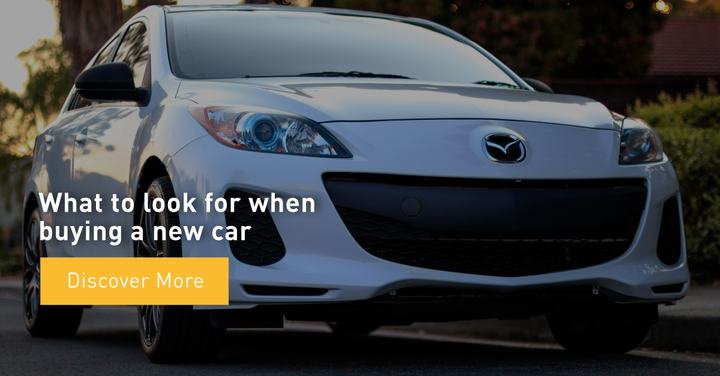 Whether it’s a commuter, an extension of your personality, or for work, the options out there for cars are more plentiful and varied than ever before.

For the young adult who just passed their car test, we would say a small and nimble, easy to park, while having enough space to carry them along with some friends

When it comes to inquiring about a car that can carry lots of things, you need to assess the variable known as boot capacity. This varies according to model, as well as manufacturer. The size of the boot is measured in litres, and the average is about 350L.

Bigger cars are obviously going to come with a bigger boot, hence, a larger boot capacity. However, another option is the estate car, also known as a station wagon, which has an even larger boot. The average boot capacity of this is about 550L. The largest option would be an SUV which, along with the height factor, the boot is also deeper, averaging around 600L.

One of the most pivotal questions to ask when buying a new car is whether to get a manual or an automatic car. Even though most cars come in both manual and automatic versions, the difference comes down to the gearbox. That is, with a manual car, you’ll have to change gears yourself, whereas, an automatic car changes gears by itself, depending on the speed at which you’re driving.

There are pros and cons to both. The main reason most drivers choose to drive an automatic instead of a manual transmission is the extra responsibilities that come with manual cars. Extra responsibilities mean there will be extra elements in these cars, such as a gear stick, and a clutch pedal. This also makes them more difficult to drive, or for some drivers, more fun.

For less experienced drivers, navigating steep inclines in a manual transmission is particularly difficult, especially when attempting to do so from a dead stop. Automatic transmissions eliminate this issue all together.

However, just because you decide on an automatic does not mean it is wise to learn to drive this, over learning on a manual. This is because, if you pass your test with an automatic car, your license will limit you to driving only an automatic for obvious reasons.

On the flipside of things, manual transmissions are the first choice for the frugal shopper, as they can cost several thousands less to purchase, and to maintain. You will also inevitably end up getting more kilometres out of the petrol you pump than you would with an automatic.

This is another aspect to think about with respect to cars. Petrol cars are fine if you do not drive for many miles. But if that is the case, diesel cars are far more economical.

When it comes to electric cars, there are many options out there in this day and age. You might want to consider buying an electric car because of the benefits.

First of all, it is actually more cost-effective to charge a car than to fill it up with fuel. In fact, it is generally 10 to 20 times cheaper to do so.

Secondly, you might be surprised how far you can travel in an electric car, as the batteries used in these vehicles have improved greatly.

There’s also hybrids. You can invest in a car that takes fuel, as well as electricity. The convenience factor of this kind of car is tough to beat.

It is always good to keep in mind that the most important factor when looking for a new car is safety.

You must ensure that you are insured by the top insurance company, just in case something happens which was not initially anticipated.

Speaking of coverage by a top insurance company, have a look at our private comprehensive car insurance policy and find out what coverage suits you best!

GasanMamo Insurance Ltd. is authorised under the Insurance Business Act and regulated by the MFSA