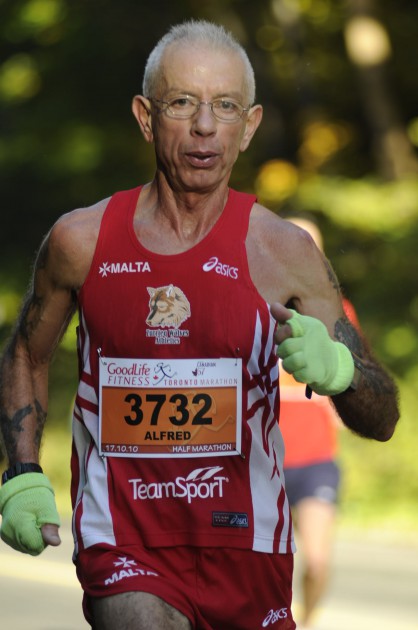 Running is an outstanding sport for people as they get older. It provides noteworthy benefits which can balance the effects of ageing. Some people start running so that they can keep fit and trim when they no longer feel able to participate in contact sports such as football, basketball and rugby. Age brings glitches but it also brings solutions. For every disadvantage there is an advantage. For every quantifiable loss there is an immeasurable achievement. This is why GasanMamo Insurance once more chose to support the 66 year old athlete; Alfred Debono who has just participated in the 17th edition of the Logicom Cyprus Marathon held earlier in this month and has also participated in the Bratislava 10K Marathon held on March 29.

Last year, the Company entered in a sponsorship agreement with Mr. Debono, one of Malta’s veteran athletes, to assist him in his participation in prominent international marathons, including marathons held abroad. “I admire Mr. Debono’s commitment to perform his best at this age. Moreover he is an excellent example of the perseverance and toughness that athletes display on the playing field. This is why we’ve maintained our support for Mr. Debono in this year’s athletic event held in Cyprus,” said Mark Mamo, General Manager at GasanMamo.

Finishing in the Top Half

Mr. Debono ran the full marathon in Cyprus and placed 52nd amongst 120 athletes, clocking a time of four hours, 4 minutes and 43 seconds. “I’m happy that I managed to achieve such a good time in this year’s Cypriot marathon. This result inspires me to chase for more marathons in the near future,” said Alfred Debono.

More than 700 Runners across Three Events

With the participation of more than 700 runners, and many more spectators, the Cyprus Marathon was successfully organised on Sunday, 8th March in Pafos. All three distances, the Full Marathon, the Half Marathon and the 10 km road races had the Pafos Medieval Fort as their finish line, where a blissful, cheerful atmosphere was created. This year’s marathon event was dedicated to the great symbol of Greek and Cypriot sport, Stelios Kyriakides, winner of the Boston Marathon in 1946.