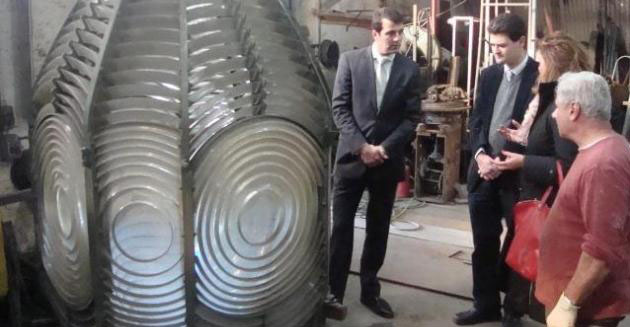 The glass panes from the housing which protects the lighthouse mechanism have had to be removed one by one very carefully. Many were broken and others had been replaced by wooden pieces. The structure had to be freed from its base of coralline limestone in the lighthouse itself, to which it was attached by an iron ring and hold-down bolts on the inside. Unfortunately many of the stones were cracked by the corroded bolts, and the ring was also in a bad state of preservation. The housing was then hauled down with a crane followed by the mechanism with the precious lenses.

When the whole structure was hauled down, the aged white paint on the cast iron housing and copper parts was carefully removed. This brought to light other problems in the structure which were not evident before. The housing was found to be made from cast iron which is brittle in its nature and was damaged at different points at its base. It is thought that this was probably intentionally done when the housing was originally fixed to its stone base, as the pre-drilled holes did not match the bolts which had been prepared for it in the stone. Joints and corroded holes were filled and in some areas a blacksmith was asked to replace extensively corrosive and missing parts. The cast iron was painstakingly cleaned, and then given a protective layer to prevent corrosion.

The copper dome of the housing has been cleaned from the white paint and once more extensive corrosion of these parts was noted. The gutters for rain water were in a very bad state and some parts had to be replaced with exact replicas, together with their hooks and outer border. It was observed that originally the outer border was in copper alloy sheet ends turned over an iron rod.

The function of the hooks which were attached to the inner part of the copper dome above the metal housing is not clear,, but it is thought that they were used to hang some material to cover the landward side of the glass, perhaps to prevent the beacon shining in a direction where it was not needed. Wood shutters will be treated and a new door onto the outside of the lighthouse will be constructed.

Upper coralline limestone has now been fitted to replace the cracked stones to which the housing was bolted. Work on the mechanism which used to light the structure is in progress and some missing lenses are being replicated. The copper period tank with its carved bronze claw legs, that held oil, is being thoroughly cleaned. There is difficulty replacing the red glass prisms that formed part of the beacon’s signal as this glass was handmade individually with gold dust for the beacon and is no longer being produced. Enquiries through the British Lighthouse Association have not been fruitful and a solution has to be found for their replacement.

“It is difficult to fathom the amount of work and time required to bring the lighthouse back to its former glory. Witnessing some of the works being carried out has helped us comprehend how painstaking such restoration is,” said Julian J Mamo. “We are pleased that we have committed to such valuable restoration works.”

Mrs Simone Mizzi, Executive President of Din l-Art Helwa together with Dr Stanley Farrugia Randon, Council Member of the organization, toured the workshop with Julian Mamo and Mark Mamo and thanked them for their company’s interest and generosity in sponsoring this project.