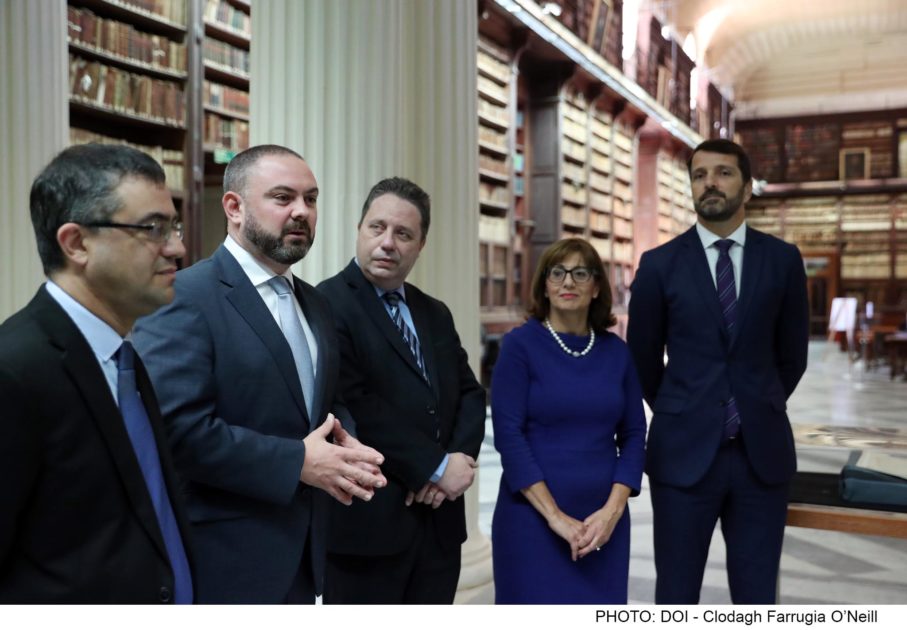 Works are well underway on the conservation treatment of the fourth and final surviving volume of Notary Placido Abela at the Notarial Archives in Valletta. These documents recall a time when land was sold for the founding of Valletta; and this restoration was sponsored by GasanMamo Insurance, one of Malta’s leading insurance companies, as part of their ongoing commitments towards the Notarial Archive Foundation (NAF) and the preservation of Malta’s paper heritage.

“GasanMamo have been proudly supporting the Notarial Archives throughout various initiatives since 2013. Most recently, we have ‘adopted’ a notary, Placido Abela, and are collaborating with the NAF towards the restoration of his final volume. We’re delighted to have been able to contribute towards Malta’s legacy with the preservation of the first three volumes,” says Julian Mamo, Managing Director at GasanMamo Insurance.

The works of Placido Abela are especially of interest to GasanMamo, a company renown to give back to the community, as his works detail the records of selling of various plots of lands on Xebb Ir-Ras (colloquially known as Sceberras Peninsula), the eventual site of Valletta.

“Thanks to this scheme we are recognising the efforts being done by the private sector in continuing to increase the awareness and the importance to restore and conserve our heritage,” said Minister of Justice, Culture and Local Government Owen Bonnici recently during the presentation of the fourth volume. “We thought to consolidate the resources at the Government Notary’s Office, which saw the introduction of a new building that is being restored, and an increase in the allocation of scholarships for the preservation of books and 25% paper, hence to ensure that more manuscripts and volumes about our past may be available,” said Minister Bonnici.

Although this notary’s work covered the period 1557 to 1595, only four of Placido Abela’s volumes have survived the test of time, allowing a fragmented glimpse into Malta’s history; which is why it is of particular importance that companies like GasanMamo continue to support the records and documentation of the rich heritage left to contemporary society.

The conservation process of such ancient manuscripts requires several specialist techniques, including extensive paper repair, consolidation and strengthening of any leaves which may have been corroded by ink, and the replacement of a binding system which is less likely to cause acidic damage over time to the pages contained within. The fragility of such documents should not be understated, as it is estimated that around a hundred volumes of Notary Abela’s works have already been lost.

“At GasanMamo, we take a particular interest in preserving Malta’s history, culture and traditions. Rather than simply giving back – it’s about leaving a sense of self to our children. It’s about the legacy, the history. That sense of pride that so many of us Maltese people feel. Surveying of the various deeds contained within Placido Abela’s work will allows us; and, more importantly, future generations, to analyse how the peninsula was actually carved and provides an invaluable model for the study of urban development; in particular that of what is arguably Europe’s first planned city – Valletta,” added Mr. Mamo.