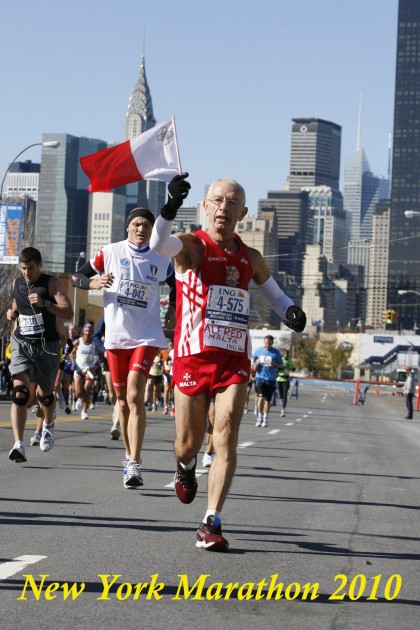 GasanMamo has entered in a sponsorship agreement with Alfred Debono, one of Malta’s veteran athletes, to assist him in his participation in leading marathons, including the 40th Special Edition of the Berlin Marathon that will be held on 29th September 2013.

“We are proud to be associated with the 64 year old athlete, Alfred Debono. His commitment and performance in such an endurance race is an honour to him and to the local sporting community and we are very proud that we will back him up,” said Mark Mamo, General Manager at GasanMamo. “Our support will help him in his participation at the Berlin Marathon held this September 2013. The gruelling distance of 42.2 km sounds daunting enough, but we are sure that Alfred will improve on his performance so far and continue to add to his successes.”

Alfred Debono, who will be sponsored by GasanMamo is amongst the most successful athletes in Malta. As a veteran athlete, that he manages to approach his sport with such energy and dedication is an honour to him as well as an example to the rest of us, particulary as he keeps on improving with time.

“I would like to thank GasanMamo for their support,” said Alfred Debono. “I am currently concentrating on running and working hard for my next feat, the Special edition of the Berlin Marathon. I have the honour to say that I am the first Maltese that ran all 5 World Marathon majors, including the Chicago marathon, the New York Marathon, the London Marathon, the Boston Marathon and the Berlin Marathon. I have achieved my dream of running all 5 and god willing will continue on my achievements and try to realise my other dream of running in the world’s best 10 marathons,” he concluded.

The Berlin marathon is a major running and sporting event held annually in Berlin and is set up as a city-wide road race where professional athletes and amateur runners participate in the race. The marathon is one of the largest and most popular in the world  and the race reached over 40,000 participants from over 100 ocuntries with over one million spectators. Along with 4 other races, it forms the World Marathon Majors, a series offering a $1 million prize to be split between the top male and female marathoners. The race has a course starting and finishing near the Brandenburg Gate.