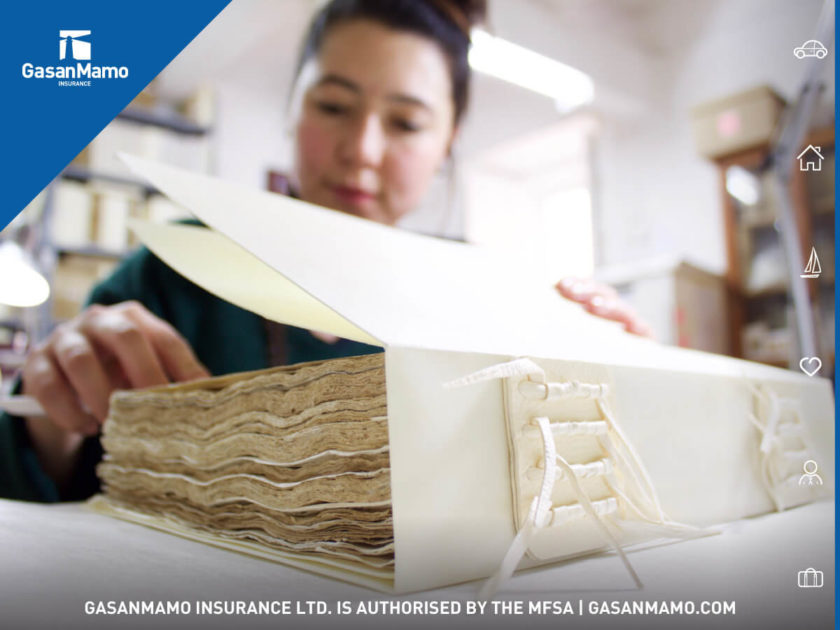 The conservation treatment of the latest volume sponsored by GasanMamo Insurance Limited, under the ‘Adopt a Notary’ scheme, has been finalized. GasanMamo Insurance Limited has donated the sum of €15,340 spread over three years, thus contributing towards the conservation of three invaluable volumes of Notary Placido Abela, which span from 1557 to 1595. This sponsorship scheme and collaboration between GasanMamo Insurance Limited and the Notarial Archives Foundation (NAF) has played an important role in ensuring the preservation of the nation’s paper heritage.  GasanMamo’s adopted notary is one of the earliest and most interesting notaries at the Notarial Archives. Although his acts cover the years from 1557 to 1595, which means that he should have over a hundred volumes in his collection, unfortunately only four volumes have survived.

Few capital cities in the world have the fortune and privilege to have documented so clearly their foundation and construction as Valletta. Placido Abela’s third volume does precisely this, as the entire 240-leaf manuscript records the selling of plots of lands on the peninsula of Xebb ir-Ras (commonly known as Sceberras peninsula), later named Valletta. In Abela’s volumes, the commissarius fabricae huius civitatis Vallettae (commissioner of the building of the city of Valletta) is appearing on behalf of the Order of Saint John to sell land situm et positum in hac civitate Valletta (placed in this city of Valletta), such as in the contract with Fra Petrus de Maire on the 8 of October 1577. Through this deed, Petrus bought a plot in the tenth district of the city, with the deed even specifying who the owners of the adjacent plots were, such as Don Christofanus Sello, whose land was neighbouring on Petrus’s ab africo seu libici (on the south-western side). Such deeds allow us to analyse how the peninsula was physically carved up and provide an invaluable model for the study of urban development and in particular that of the early modern European city.

The conservation treatment required for the preservation of the third volume of Notary Placido Abela involved several interventions, including extensive paper repairs and infills, the strengthening of corroded leaves and sewing, as well as the replacement of the current acidic twentieth century binding with an appropriate parchment cover, which is in-keeping with similar sixteenth century manuscripts. Finally, a protective enclosure was created to house and protect the manuscript. All treatments were carried out using the highest quality conservation grade materials, reflecting NAF’s high standards and deep commitment to international conservation practice and work ethic.

The conservation work on the last volume of the notary Placido Abela was carried out by paper conservator Alejandra Molano Contreras and under the supervision of book and paper conservator
Dr Theresa Zammit Lupi. This collaboration and the sponsorship were very influential in the continuation of the high standards upheld by NAF, as mirrored in its commitment to transform the Notarial Archives into an interdisciplinary centre of excellence. It is hoped that further collaboration will take place between the two entities.