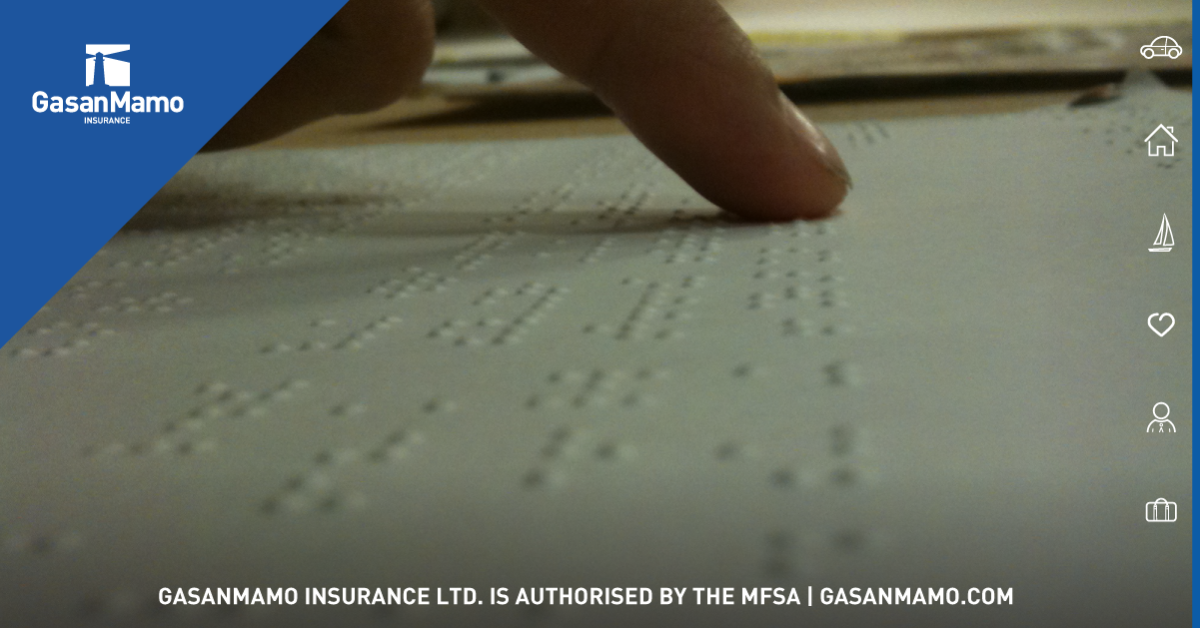 Reading instructions or recipes, getting lost in a good book or navigate road signs… for many of us, reading is something we do as second nature, without thinking. We pick up the page, scan the text with our eyes, absorb and understand the information.

For some people, however, who suffer from a vision impairment, reading is more complex than that, and requires a system which is known as braille.

Braille is a tactile writing system which can be used by those with visual impairments, such as those who are legally blind.

It consists of a system of raised dots, on embossed paper, which form letters from the alphabet that can be ‘read’ by touching them with the fingers.

Advances in technology means that it is now possible to use braille on screens, making it even more accessible to those who rely on it.

Although now essential to the millions of people with visual impairment who rely on it, braille was not originally designed as a reading aide. The History of Braille

The original idea was based on ‘night writing’, a tactile military code developed by Charles Barbier.

Napoleon required soldiers to be able to communicate at night in silence without having to use a light source which might have made them detectable.

For this reason, Barbier developed a system of 12 raised dots, to represent 36 different sounds.

This was ultimately rejected by the military for being too complicated for soldiers to recognise by touch.

In 1821 however, Barbier met Louis Braille when he visited the Royal Institute for the Blind in Paris. Braille was fed up with the laborious process of creating books, involving using raised print which was difficult to write.
He quickly established the flaws in the system; one, that it represented only sound, meaning that it could not be used to write, and two, that the 12 dots were too large for a human figure to touch all at once.

He revised the idea, reducing the dots to 6, and assigning each collection to a specific letter of the alphabet. This then developed into the system that we recognise today.

It is important to remember that braille itself is not a language. Instead it acts as a code, through which many different languages – from English to Arabic – may be read and understood.

In this sense it is universal; it can be understood by people all over the world, and used to understand any language. It also provides literacy for allowing people to express and read whatever they like. A pretty impressive invention for 15 year old Louis Braille!

The symbols used in braille are made within units of space, which are known as ‘braille cells.’

A full braille cell will contain 6 raised dots, which are arranged in two parallel rows of 3 dots each.

The positions of these dots are numbered from 1-6, and a total of 64 combinations are made possible using one or more of these 6 dots.

One single braille cell can be used to represent a word, a punctuation mark, a number, or an alphabet letter.

There are two types of writing with braille; contracted and uncontracted. In uncontracted braille, every letter of every word is expressed individually using the braille alphabet.

This is often found in books for young children, as it is easier for them to process and register. For adults who come to braille, it can also be useful in labelling personal items, or kitchen materials, while they are getting to grips with the language.

Contracted braille is more common in reading material for adults and in general braille books, and this is where cells are used individually, or combined with others, to make whole words or contractions.

This saves space and paper and also helps to make the process of reading more fluid and easier to digest. There are 180 different letter contractions which are used in contracted braille, including 75 short form words for common words such as ‘him.’

Braille was originally created using a slate and stylus, consisting of a template with evenly spaced depressions, and a stylus which can be pushed through paper on the slate to create dots on the reverse of the paper.
These are useful for quick notes, as they are very portable. Braille Writers are also used to producing braille; this is a machine with 6 keys, numbered to correspond to the 6 dots on a braille cell, as well as a backspace, linspace and space bar.

Most braille symbols contain more than a single dot (with the exception of the letter ‘a’, and this allows combinations of keys to be pushed at the same time.

Technology has also allowed braille to keep up with the times, with the development of software, and portable electronic braille devices.

These allow their user to save their writing, and edit it at a later date. This can be read back to them verbally or tactually, and can even produce a hard copy through the use of a computer driven braille embosser. This allows braille to continue to evolve with the modern world, and ensures that users are not left behind.

The World Blind Union has stated that they believe that reading is a basic human right, and the beauty of braille is that it makes this activity truly accessible to all, regardless of any visual impairment.

What began as a desire from 15-year-old Louis Braille to create an alphabet which could be read with the fingertips has evolved into a system which brings the joy of reading to a truly universal audience!