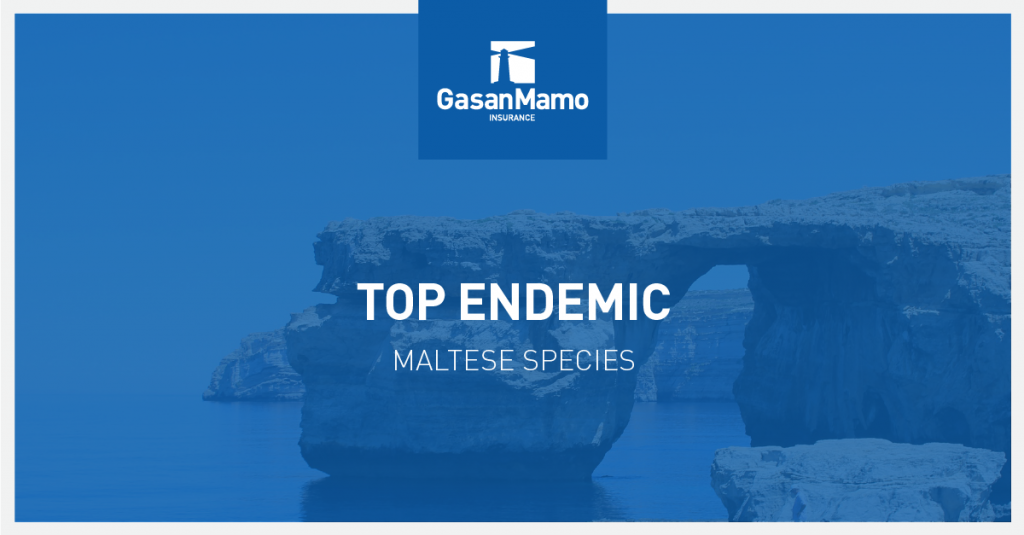 Some 78 endemic species have been recorded in the Maltese Islands to date, which is a significant number when considering how small the archipelago’s total area is. An endemic species is a species of plant or animal which is unique to a particular place or area. Here are some of the top Maltese ones:

The Maltese Freshwater Crab, or Qabru, is on the verge of extinction. It survives exclusively in areas where fresh water runs all year round, such as Bahrija and San Martin. The crab, which is carnivorous, can grow up to 8cm in length and is characterised by a green-grey colour. Sadly its numbers have dwindled alarmingly due to freshwater streams drying up and pollution. People have also been known to capture specimens even though it is against the law to do so.

This species is actually a subspecies of the Maltese Wall Lizard, of which three still survive today. The Filfla Lizard, as its name suggests, is endemic to Filfla, the islet off Malta’s south coast. It is the largest of all the Maltese Wall Lizard subspecies and arguably the prettiest – it’s black with bright blue spots. The population is believed to have healthy numbers and is not a concern for extinction, although the Selmunett Lizard (another subspecies) is believed to have become extinct in 2005.

The Maltese Ruby Tiger Moth, or Rubin in Maltese, is an endemic species of moth which is common throughout the Maltese Islands. Growing up to 2cm in length after it comes out of its furry caterpillar, it has dark brown forewings and reddish-pink back wings. The moth’s back wings also feature various markings.

The critically-endangered Maltese Rock Centaury is a flowering plant which is most commonly found on the cliffs of the Maltese archipelago. Its flower is wispy and a bright shade of purple. The rock centaury, which is known as a Widnet il-Bahar in Maltese, is Malta’s national plant. Due to its dwindling presence on Maltese cliffs it can now be found cultivated in places such as roundabouts.

This plant is also one which is present on cliffs. It is believed to be extinct in Malta, however it is found relatively frequently in Gozo. In fact, its Maltese name is Sempreviva ta’ G?awdex. The plant forms a bush which grows to about a metre high, with whitish leaves which protect it from heavy wind exposure on cliff-faces, as well as summer droughts. It is also critically endangered.