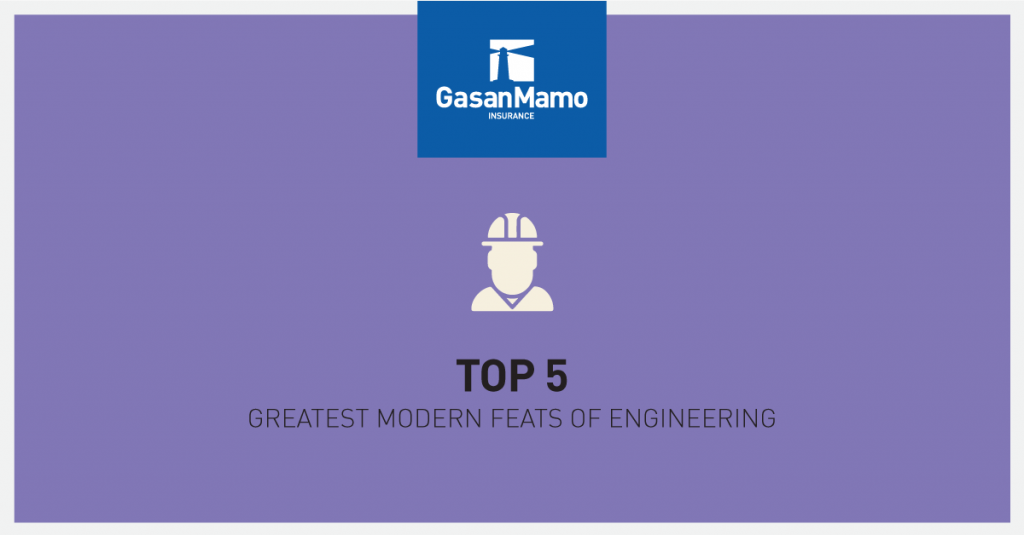 The Millau Viaduct is the world’s tallest bridge. It was constructed to ease congestion during the summer as people made their way to and from Spain through the Tarn valley near the town of Millau. The bridge’s roadway is a dizzying 270 metres above the ground its towers sit on, whereas its tallest tower is 343 metres high at its summit. It is an impressive feat of modern engineering both due to its height and how it was constructed. Rather than bridge sections being hoisted into place piece by piece, the bridge’s road way was rolled out from either end, meeting in the middle upon completion. The bridge opened in 2004.

The Burj Khalifa, which towers above the Arabian desert, is the world’s tallest man-made construction of any type. What’s even more impressive about this feat of modern engineering is that it outstripped the previous tallest skyscraper in the world, Taiwan’s Taipei 101, by an unbelievable margin of over 300 metres. In fact, the Burj Khalifa stands some 829 metres tall, and boasts records for the world’s highest restaurant above ground level, the world’s tallest elevator in a building, and the record for the largest number of floors contained in a building. The Burj Khalifa was completed in 2010.

China’s Three Gorges Dam took a lengthy 14 years to complete, and displaced roughly 1.5 million people who previously lived in the path of the newly-created reservoir which formed behind its 180-metre-high walls. The dam is hydroelectric, and generates roughly 3% of the world’s most populous country’s energy needs. Each of its 32 main generators weigh 6,000 tons apiece. Shipping along the Yangtze River, which the Three Gorges Dam spans, is expected to reach levels ten times as high as what they were prior to the dam’s completion. It must be said that the dam has been the source of much controversy, and its construction has been blamed for causing serious environmental problems.

The Large Hadron Collider was constructed in order for scientists at the European Organisation for Nuclear Research (CERN) to test and further their particle physics theories. It is essentially the world’s largest scientific instrument, with its underground tunnel having a circumference of 27 kilometres, crossing the Franco-Swiss border at various points. Some 10,000 scientists from around the world contributed to the Large Hadron Collider’s design. Construction had taken ten years at the time of completion in 2008. As of this year, CERN has announced that it will double the LHC’s energy capacity as scientists have reached the limits of what they could find with it in its current configuration.

Kansai International Airport was completed in 1994 and serves the Kansai region of Japan. It was built on an artificial island in 18.5-metre-deep water in the middle of Osaka Bay, which required three mountains and 21 million cubic metres of rock to be excavated for its construction. Indicative of how the Japanese never doing anything by halves, the airport’s 300-metre-long terminal building was completed in under 18 months. The airport handles 18 million passengers and 670,000 tons of cargo annually. It is also earthquake-proof, having survived the monstrous 1995 Kobe earthquake which literally shook the region to its core.