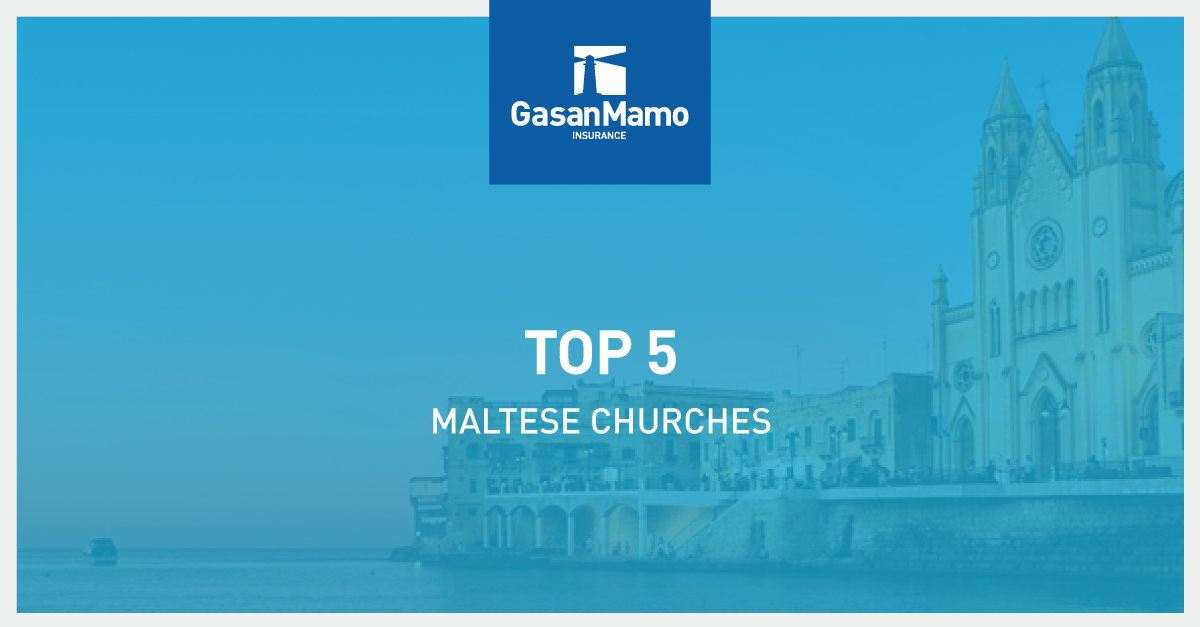 Despite its small size the Maltese islands boast a whopping 359 churches – that’s just under one for every day of the year! This number is hardly surprising given the importance religion is given in Maltese culture, so much so that back in the day many villagers thought that by contributing to building a church they would have an afterlife insurance that will guarantee them a spot in heaven.

In this blog we take a look at the top five churches in Malta.

Mosta dome has several names including Rotunda of Mosta or Rotunda of St Marija Assunta. It is most famously called Mosta dome and is perhaps one of the most impressive churches in Malta boasting a massive rotunda, which is in fact the third largest in the world. The Mosta dome church was built in 1860 and it took Mosta villagers 27 years to complete the church designed by French designer George Grognet de Vasse. Apart from its impressive dome, the Mosta dome is also well known amongst the Maltese for surviving an air raid during the Second World War, when a 200kg bomb fell through the dome without exploding.

Known as the crown jewel of Malta, St John’s Co-Cathedral is a masterpiece of two styles with its Mannerist exterior and Baroque interior. The majestic co-cathedral was commissioned in 1572 by Grand Master Jean de la Cassière as the church of the Order of the Knights Hospitaller of St John and designed by the Maltese military architect Gerolamo Cassar. With its richly gilded arched columns and divinely painted vaulted ceilings its hardly surprising that St John’s Co-Cathedral is home to world renowned works of art such as the works of Caravaggio and Mattia Preti. The history and beauty of St John’s Co-Cathedral cements it as a UNESCO World Heritage site.

Ta’ Pinu is best known for its miraculous intercessions, which stems from the story of two locals hearing a ‘voice’ calling them to pray at the chapel, in the 19th Century. For this reason the minor basilica was built to become a shrine and place of pilgrimage dedicated to Our Lady of Pinu. Ta’ Pinu differs from the baroque style of the rest of islands’ churches, and whilst the vast majority of parish churches in Maltese islands are in the middle of congested town centers, the Ta’ Pinu Basilica spectacularly rises out from the middle of an isolated valley with 360 vistas of the lush green surrounding countryside.

The cathedral dates back to the late 17th century, but stands on the site of the old Norman cathedral, which was destroyed in the 1693 earthquake that devastated the south-eastern corner of Sicily. The only thing that remained was the massive altarpiece depiction of the Conversion of St Paul by Italian Knight and painter, Mattia Preti. It is said that the spot where the Mdina Cathedral stands was the site of the house of the Roman Governor, Publius, whom St Paul converted to Christianity. The beauty of St Paul’s Cathedral in Mdina is not only limited to its architectural beauty but also its location within the fortified walls of Mdina.

This is one of Valletta’s oldest churches dating back to 1577. St Paul’s Shipwreck church is particularly fascinating because of its dark and gloomy interior which complements the age and venerated relics , such as the right wrist bone of the saint and part of the column on which he was beheaded, found inside the church. Similar to many other churches across Malta, St Paul’s Shipwreck boasts fine artistic works, including the magnificent paintings by Attilio Palombi, and Giuseppe Calì, and also master craftsmanship, such as the statue of St Paul which was made by Melchiorre Gafa’.

The beauty of Maltese churches is so vast, that narrowing it down to just five was quite a feat. Luckily here at GasanMamo Insurance we like doing the hard work for you, that’s why we make picking an insurance policy as simple as possible.