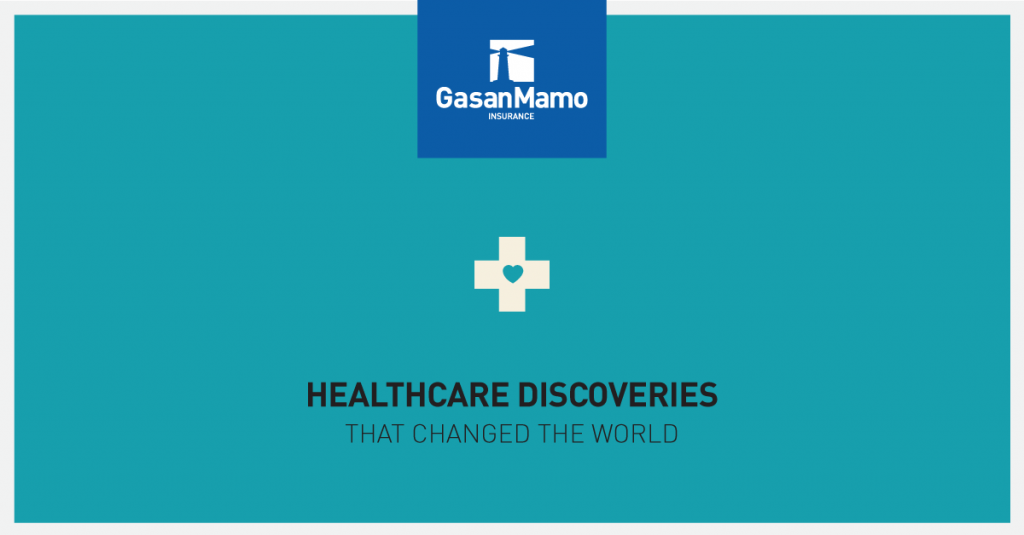 Our first healthcare discovery is courtesy of Boston dentist William Thomas Green Morton, who is credited with discovering the inhalational anaesthetic method in 1846. However, an American physician called Crawford W. Long had actually operated successfully on a patient under anaesthesia in 1842. Inhalational anaesthetic made invasive surgery a lot more viable that it had previously been for millennia, because patients stopped feeling intense pain caused by surgeries such as amputations and brain surgeries.

The accidental discovery of penicillin became the foundation for modern antibiotic treatments we all have used at some point in our lives. The discovery of the fungi and its bacteria-killing properties, made in 1928 by Scottish scientist Alexander Fleming, has made the treatment of bacterial infections something routine and relatively easy.

The use of X-rays in medical applications was discovered by German physicist Wilhem Rontgen in 1895. X-ray, which are part of the electromagnetic spectrum just like visible light, have been instrumental in detecting all manner of ailments ever since. They are used for radiographs, computed tomography, fluoroscopy and radiotherapy.

Insulin was discovered in 1869 by a medical student, Paul Langerhans, who was studying in Berlin. He was observing the structure of the pangreas under a microscope. He noticed small heaps of cells within it that were later found, by Edouard Laguesse, to produce secretions which play a role in digestion. Insulin was synthesised in the early 1920s and diabetics have been living long, healthy lives ever since.

Stem cell therapy was first used to treat illness in 1968, when the very first bone marrow transplant occurred. Nowadays it is used to treat all manner of things from neurodegeneration, to blindness, to brain and spinal cord injury. It remains a hotbed of controversy due to the notion of meddling with nature that many people hold.

Chemists working for pharmaceutical company Bayer AG created a synthetic version of salicin in 1897, giving the world the foundation for the headache tablets we rely on so greatly today. Aspirin also has antipyretic and anti-inflammatory properties.

Chlorpromazine, a psychiatric drug, was first used in a clinical trial in 1951. The clinical trial consisted of 38 psychotic patients who were administered the drug in various doses. It was shown to have amazing sedative effects, as well as greatly improving thinking and emotional behaviour. It laid the foundation for all psychiatric drugs still widely in use today.

Polio is a disease, causing paralysis and even death which was feared throughout the world during the first half of the 20th Century. Nowadays, the disease has almost been completely eradicated. The world has Jonas Salk, working at the University of Pittsburgh, to thank for creating an effective vaccine to combat it. Although cases still appear from time to time, polio is nowhere near the epidemic it was in distant living memory.