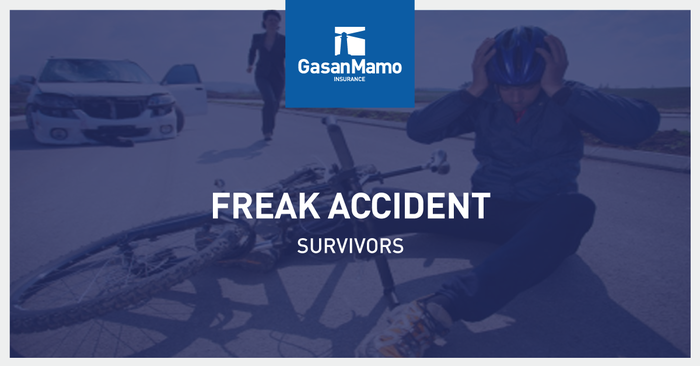 It’s questionable whether this individual would ever be a suitable candidate for health insurance in light of his affinity with chainsaws! The 74-year-old gentleman in question was out felling trees in the woods with his beloved tool when a tree he had just cut down pulled down a high-hanging branch with its downdraft. This branch hit him and knocked him over into a ditch.

While this was happening, the falling tree also hit another tree, which then fell on the man’s leg, breaking it and trapping him. He was briefly knocked out while this was going on, waking up only to find his chainsaw still running and cutting through his neck.

He proceeded to throw the chainsaw off, free himself and get back in his truck while holding his half-severed neck in a death grip before driving half a mile to a friend’s house to seek assistance. He only received medical treatment a full hour after he almost cut off his own head.

While he had some trouble with infections and needed a tracheotomy to be able to speak and breathe, he made a full recovery and is now in his mid-80s.

An American college student was driving along the Chesapeake Bay bridge in the American state of Maryland. Traffic on the bridge was at a standstill in front of her as she patiently waited to make progress on her journey to visit her relatives.

Just by chance, she took a look in her rear-view mirror, only to see an 18-wheel lorry barrelling towards her with no sign of stopping. Her car was slammed against the bridge’s embankment in the ensuing impact, before being nudged over it and plummeting three storeys into the water of Chesapeake Bay below.

Luckily for the driver, her windscreen had shattered during the initial impact. While this caused her car to sink quickly, she had the presence of mind to unbuckle her seatbelt quickly and swim to the surface.

Once there, she swam to one of the bridge’s supports and waited to be rescued by police. A trip to hospital showed that she had not suffered any broken bones or even cuts – she merely had some minor bruising. No health insurance needed here!

A teenager was out spear fishing while out on a fishing trip with some friends. He was using a gas-powered spear gun to make his catch. The odd thing about this particular story is that the teenager remembers holding a fish caught by a friend one minute, and falling overboard with a spear sticking out of his forehead the next.

To the amazement of the doctors who treated him, he was conscious throughout his entire ordeal which saw the spear pierce right through his head. He is said to have had little recollection of the accident, however he went on to make a full recovery following intensive physical therapy. Last time we checked, we didn’t offer health insurance coverage for a spear right through the head. Yikes.

A man was attending a rodeo with a friend when storm clouds began to gather overhead. As the rain began to lash down on the pair, they decided shelter under a tree, which is of course the exact opposite of a safe thing to do in a storm.

The inevitable happened – sparks flew off the tree’s trunk, and a second later he was struck by lightning. Before he had time to register the first strike, a second bolt of lightning struck his right foot and shot out of his left arm.

He did not suffer anything other than soreness and numbness, but the sheer odds of this happening to anyone bear thinking about. Being struck twice in a row and then surviving is nothing short of a miracle.

A motorcycle rider was out for a ride on his bike with a friend on his day off. Travelling at approximately 80km/h, he was suddenly struck in the visor by a pigeon that happened to be flying particularly low.

The pigeon, which died on impact, smashed through the rider’s visor as well as his glasses. This knocked him unconscious, causing him to slump forward on his bike and inevitably its accelerator.

His bike veered off the road and smashed into a tree at over 220km/h. Luckily the impact happened at an angle, and the rider was thrown clear. He suffered a broken leg, together with two skull fractures and some other serious injuries, but he went on to make a full recovery.

Freak accidents are extremely rare – no-one expects to be hit by a low-flying pigeon or struck by lightning twice in immediate succession, but they can happen to just about anyone, but as the old adage goes, it’s better to be safe than sorry. Health insurance provides protection for your most vital asset, – your very own health. Protect yourself against the most freakish of accidents, as well as the much more mundane of occurrences which can be detrimental to your health.