Home » Blog » Crazy Insurance Policies From Around The World 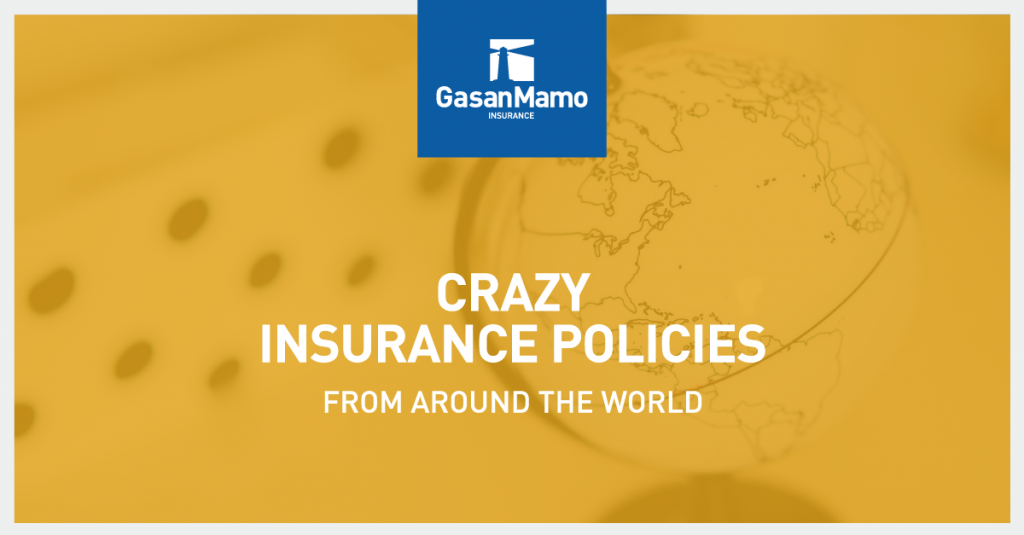 Many of us have insurance to cover our homes, cars or other prized possessions. Others may have health insurance policies bestowed upon them by their employers, whereas others might take out a life insurance policy to cover any costs which their family members may incur in the event that they pass away.

With the above being perfectly run-of-the-mill types of insurance, a little dig around the internet shows that insurance is taken out on things, and for reasons, that range from a little odd to the downright bizarre. This week, we take a look at some of the world’s craziest insurance policies:

Covered for an Alien Abduction?

All you Downton Abbey fans out there will remember Martha Levinson, Cora’s loud-mouthed, widowed American mother from the show’s third and fourth seasons. She was played by Hollywood veteran Shirley MacLaine, who is renowned for her unconventional New Age beliefs.

Even when considering MacLaine has those beliefs, the insurance policy she holds is as odd as they come, so we’re just going to put it out there – her career is insured for 25 million dollars against an alien abduction. Yes, you read that correctly. If a little a green man with big, black eyes comes and takes her away for a while and performs weird experiments on her in a spacecraft, she’ll have a nice chunk of change to come home to once he’s done with her.

Apparently, this type of insurance is far from being uncommon, with over 20,000 US citizens holding alien abduction insurance policies. Whether this craziness could ever gain legitimacy in Europe is questionable, but it’s still fun to consider what our American cousins think of as normal.

A British lady who goes by the name of Nicola Jones is married to a man who has a penchant for passing crude jokes about divorcing her should she lose her looks with the passage of time. To mitigate the effect of the loneliness and financial difficulty such a scenario would cause, she cleverly took out an insurance policy which would see her receive a pay-out to the tune of £100,000 if her husband divorced her. The funniest part of the whole thing is that in such an instance, Mrs Jones’ ugliness, or lack thereof, will be judged by ten independent construction workers.

If you’re partial to the odd celebratory cigar, then you’ll love this one. At one point in time, Lloyd’s of London was the insurer for the world’s biggest cigar, which measured some 12 feet in length and was made up of over 15,000 tobacco leaves. One assumes that said cigar was stowed in a highly fire-resistant location.

From cigars, we move to wine. Angela Mount is one of the world’s foremost wine tasters, credited with revolutionising wine for the British high street consumer, bringing quality to the masses who shop in the country’s supermarkets. Her wine tasting ability is so coveted that an insurer found no problem with insuring her taste buds for £10 million.

Fans of golf will remember Anthony Kim, an American golfer who shot to fame in 2008. Following three PGA Tour wins, he was tipped to become one of the best players the game has ever seen. Sadly, he suffered an injury in 2012 and hasn’t played on the Tour since. The strange thing is that even if he never plays another round of professional golf again, he can collect $10 million from an insurance policy which covers him from this eventuality. In 2013, it was said that Kim doesn’t even play golf on a recreational level anymore, so he could be cashing in pretty soon.