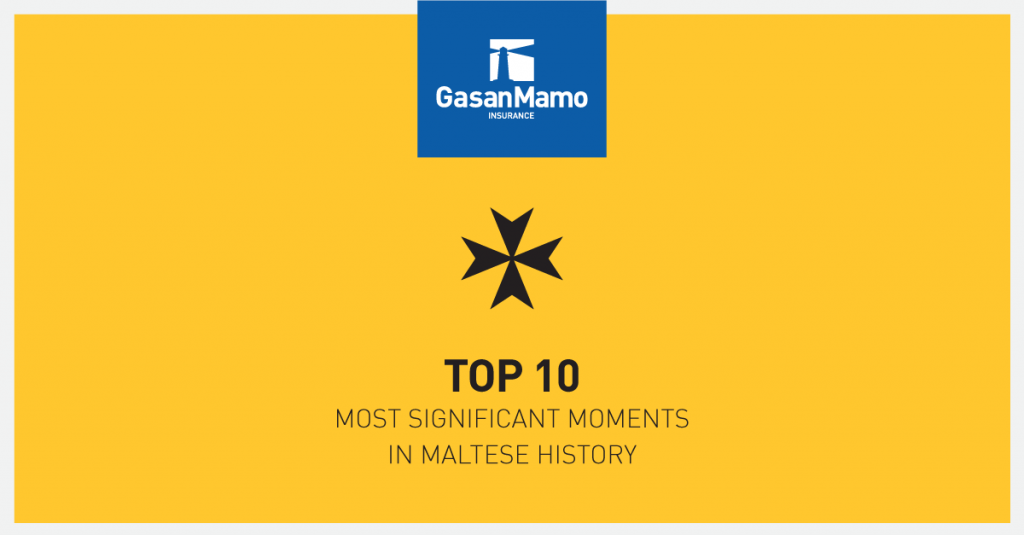 Our list of the most significant moments in Maltese history begins with Malta and Gozo’s world-famous megalithic temples, built by a pre-historic people believed to have originated from Sicily, begin to be constructed. There are 11 sites dotted around the Maltese Islands which were constructed between 3600 and 2500 BC and are among the oldest free-standing structures in the world (only the recently-discovered Gobekli-Tepe complex in Turkey is said to pre-date them).

2. Romans wrest Malta from the Carthaginians

The Roman Empire, still in its infancy, conquered Malta from Carthage in 218 BC. Malta remained under Roman rule for over 1,000 years and the island prospered during that period, becoming known for its fine cloth, honey and as a trading post. Evidence of the latter exists in the form of Rabat’s Roman Villa, excavated in the late 19th Century.

3. St. Paul the Apostle is shipwrecked

St. Paul the Apostle was on his way by sea from Jerusalem to Rome in order to appeal to Julius Caesar for his rights as a Roman citizen. He was doing so because the elders of Jerusalem wanted him executed after telling the city’s people to forsake Jewish customs. He was shipwrecked at St. Paul’s Islands in 60 AD, along with approximately 270 others. The Maltese people welcomed him with “unusual kindness” (in his own words) and they converted to Christianity after witnessing him suffer no ill-effects when he was bitten by a snake.

Although not much is known about over 200 years of Arab rule in Malta, the Maltese language itself is of Semitic origin and heavily influenced by Arabic. The names for many settlements throughout the Maltese Islands have clear Arab influences and were believed to have been founded during this period. The conquerors also imposed Islam upon the Christian population. They are also believed to have introduced citrus fruits and cotton to the islands.

The Ottoman Empire desperately wanted Malta to further its military ambitions during the 16th Century. It sent an army of about 40,000 men to the island in 1565, and proceeded to besiege it for four long months during that year. Vastly outnumbered, the Knights of Malta, locals and others fighting alongside them held on until the Ottomans gave up their relentless assault and left Malta on September 11 of that year.

The capital city of Malta, a UNESCO World Heritage Site and the first planned city in Europe, was designed by the Knights of Malta’s pre-eminent military engineer and built in honour of Grand Master Jean de Valette. Intended as both a fortress city and a world cultural centre, Valletta was conceived with the aim of warding off a rumoured Ottoman invasion which never materialised. The beautiful Baroque city was completed in 1581.

In 1798, the Maltese people were trying to retake Valletta from a French general and his forces garrisoned inside the city’s walls following the surrender of the Knights of Malta to Napoleon. The Maltese were rebelling against the French who had made themselves deeply unpopular with the locals in the space of a few months following their assumption of control of the island. The Maltese requested assistance from the British, who helped kick the French out in 1800 by means of a blockade. It was the beginning of 164 years of British rule during which infrastructure, fortresses and significant cultural influences were contributed.

15th August 1942 is a date firmly etched in the Maltese conscience. The SS Ohio, a tanker operated by the British navy, limped into Grand Harbour to the sound of Rule Britannia and cheering crowds. She had been bombed mercilessly by Axis fighters and was listing badly, snapping the towlines of the boats helping her to her destination. On-board were vital supplies needed to sustain Malta’s starving population for at least a few more months. The feast of Santa Marija is one of the most significant in the Maltese calendar.

The Maltese people voted for their future in a constitutional referendum held between 2nd and 4th May 1964, becoming an independent constitutional monarchy on 21st September 1964, Malta’s Independence Day. Gorg Borg Olivier was Prime Minister at the time Malta became independent, while Queen Elizabeth II was the ceremonial head of state. Anthony Mamo was the first President of Malta when it became a republic some 10 years later.

A referendum on whether to join the European Union was held in Malta in 2003, with the yes vote passing by a slim majority. Malta became a fully-fledged EU member on 1st May 2004. It joined the common currency some four years later.